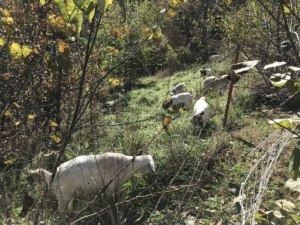 The Barnyard Weed Warriors are a group of mainly female goats, from Oak Valley Goat Ranch.  We have American Boer Goat Association (ABGA) registered goats and cross bred goats, including Kiko-Boer and Spanish-Boer goats that are bred to produce meat.  The goats are generally heavier muscled animals than dairy goats, which are gangly, skinny looking all the time.  The Boers and Boer crosses generally are more muscled and the females weigh between 80-175 pounds, while the males can weigh 180 up to 350 pounds.

Mary has started a new breeding program and has great hopes of brining the true South African Boer bloodlines back to the forefront of her program.  It is her hope to breed an animal that is heavier muscled and have a higher resistance to worms with a kid goat that is ready to get up and go as soon as they are born.  Look for the South African Boer kids in the Spring of 2022!

What do you call them?

Breeding females are called Does or Nannies. (The meat industry prefers Does)

Young males are called, bucklings until they are neutered or used for breeding.

Neutered males of any age are called wethers.

Young females are called doelings until they have their first litter of babies.

Kids are what you call young goats of any sex under six months of age.

When a doe is giving birth, she is in the process of kidding.  Really! Not kidding you on this one!

Mary was very knowledgeable and went the distance to get the job done. The goats got into the most inaccessible areas and destroyed the weeds. She moved the fence many times to get the hers to a new area to clear. Outstanding job. The kids loved to talk to her and watch the goats.

I just want to commend Mary and her goats.  It was wonderful to be able to walk in my pasture now that the goats cleared every sign of poison ivy.

Fantastic job! Mary, the goats, & dogs worked their magic. It was a joy watching the goats in action!

Mary and goats are great! She works her dogs with the goats to keep them under control!

Great way to clear those impossible to mow areas! Mary is amazing – she unloads the goats, puts up the fence, moves the fence, untangles the goats! And they clear down to bare ground. What a great job and great entertainment to boot!

This is an excellent way to get rid of unwanted brush and poison ivy. It’s amazing to watch the goats go to work. Mary and her team of dogs do a great job of keeping the goats contained, the goats are happy to munch away. Couldn’t be any more pleased with the results. I highly recommend this service – it’s natures way to keep brush and over growth under control.